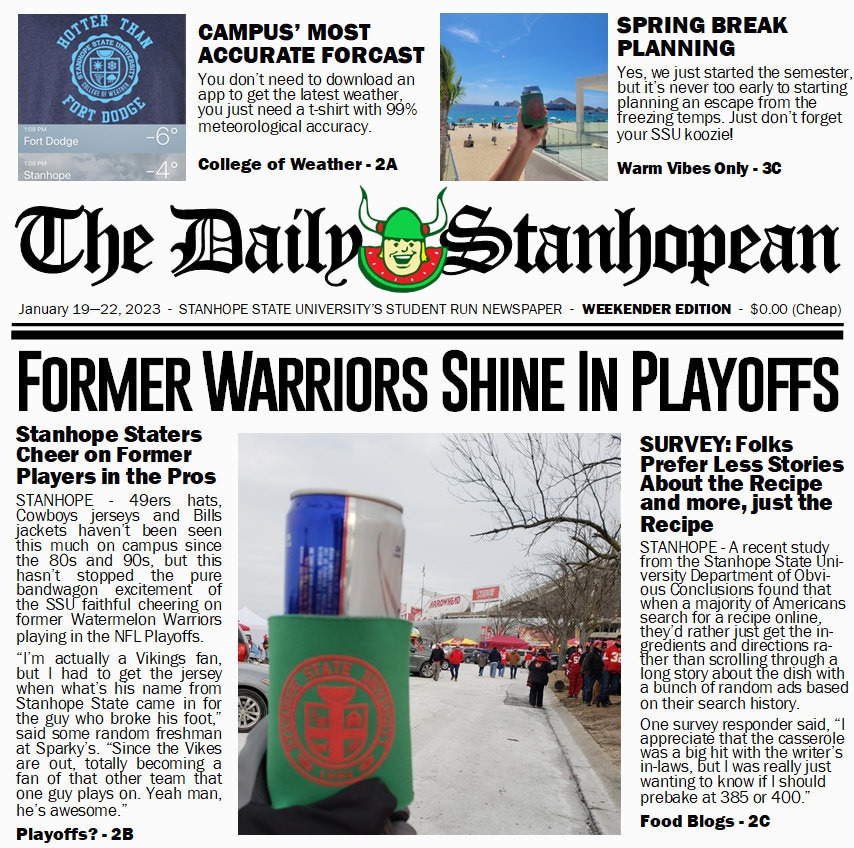 Here's what Stanhope Staters are reading today. Available at newsstands across campus.

Stanhope Staters Cheer on Former Players in the Pros

STANHOPE - 49ers hats, Cowboys jerseys and Bills jackets haven’t been seen this much on campus since the 80s and 90s, but this hasn’t stopped the pure bandwagon excitement of the SSU faithful cheering on former Watermelon Warriors playing in the NFL Playoffs. “I’m actually a Vikings fan, but I had to get the jersey when what’s his name from Stanhope State came in for the guy who broke his foot,” said some random freshman at Sparky’s. “Since the Vikes are out, totally becoming a fan of that other team that one guy plays on. Yeah man, he’s awesome.”

SURVEY: Folks Prefer Less Stories About the Recipe and more, just the Recipe

STANHOPE - A recent study from the Stanhope State University Department of Obvious Conclusions found that when a majority of Americans search for a recipe online, they’d rather just get the ingredients and directions rather than scrolling through a long story about the dish with a bunch of random ads based on their search history. One survey responder said, “I appreciate that the casserole was a big hit with the writer’s in-laws, but I was really just wanting to know if I should prebake at 385 or 400.”

You don’t need to download an app to get the latest weather, you just need a t-shirt with 99% meteorological accuracy.

College of Weather - 2A

Yes, we just started the semester, but it’s never too early to start planning an escape from the freezing temps. Just don’t forget your SSU koozie!